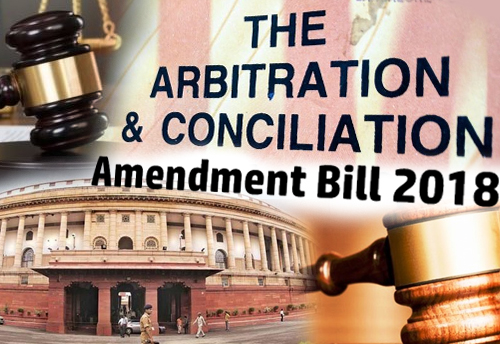 Introduction:The Arbitration law takes many turns in past few years, in recent years ADR proceedings became much needed tool for every company and therefore the Act changed and amended many times.

The Bill has been introduced following the recommendations of a High-Level Committee constituted by the Central Government under the Chairmanship of Justice (Retd.) B. N. Srikrishna. The mandate of the Committee was, inter alia, to examine measures to strengthen arbitral institutions in India and suggest ways to improve the efficiency of the arbitral framework in India.

The overall intent of the Bill is laudable, but the Bill is something like a mixed blend, it is good, not so good and bad signs.

Several provisions depart from the recommendations of the Committee and if accepted, would mark a regressive step in the goal to make India a global arbitration hub.

Some key issues with the Bill are discussed below:

Major Changes• The central feature of the Bill is that institutions are expected to replace courts fully in the procedure for appointment of arbitrators. As per the proposed amendments, if the Supreme Court or any High Court has designated an institution then that court does not have jurisdiction to entertain an appointment application under Section 11 of the Act.

• It is clarified that the amendments to the Arbitration and Conciliation Act that were introduced with effect from 23 October 2015 will be purely prospective, i.e., the amended Act will only apply to arbitrations, and court proceedings relating to arbitrations, if the arbitration itself was commenced after 23 October 2015. This is deviation from the position of law as recently settled by the Supreme Court, but provides welcome clarity.

• The Arbitration Council of India has been established as the statutory authority to identify and grade qualifying arbitration institutions to be considered for designation by the High Court or Supreme Court for appointment of arbitrators.

• The twelve-month time limit prescribed for completion of the arbitration proceedings will commence after exchange of pleadings is complete (for which a new time limit of 6 months has been introduced) even for domestic arbitrations. An arbitrator’s mandate can continue even after expiry of the time period pending the court’s consideration of an application made by parties for extension of time.

• In an application for setting aside an arbitral award, parties are restricted to proving their case by reference to documents produced in arbitration and on a plain reading, may not introduce any fresh evidence with their application. This curtails the scope of challenging arbitral awards and will promote finality of awards and greater respect for the arbitral process.

• It appears that only institutions which have a presence within their jurisdiction can be designated by a High Court (no such restriction placed on the Supreme Court). This may prejudicially affect smaller states which may not have an institution of repute.

• Institutions are to be graded by reference to infrastructure and “availability” within a jurisdiction. However, there is no reason why these factors are relevant if the only reason institutions are being referred to in the statute is to use them as appointing authorities rather than to administer arbitration.

• By deleting Section 6-A of the Act, there is presently no guidance available as to the scope of an institution’s enquiry while considering an appointment. Established institutions with substantial experience in acting as appointing authorities have devised clear rules as to their scope of enquiry. However, since there is no legislative clarity, this is likely to result in more litigation and will defeat the objective of speedily resolving applications for appointment.

• The proposed Arbitration Council of India is a purely government-appointed body. This significantly lowers its credibility, especially since the government is the biggest litigant in India.

• While the Bill makes provision for accreditation of arbitrators, the Act does not clarify the significance of such “accreditation”. It is not clear, for instance, whether only accredited arbitrators can be appointed by institutions.

• The Bill provides for introduction of the Eight Schedule which lays down qualifications of arbitrators. However, a notable omission in the Eight Schedule is foreign qualified lawyers. A plain reading suggests that they are not qualified to act as arbitrators even in international commercial arbitrations. This is not in keeping with current practices and will be a backward step in promoting international commercial arbitration.

• There appears to be some inconsistency as regards the application of the Fourth Schedule to international commercial arbitration. Contrary to Section 11(14), Section 11(3A) suggests that if no arbitral institution is designated and the Supreme Court is called upon to act as appointing authority, then the SC is bound by the Fourth Schedule even for international commercial arbitration.

• Qualification of Arbitrators: The Bill is extremely unclear as to the significance of the Eighth Schedule. A plain reading of the Schedule appears to suggest that ONLY such persons who meet those requirements are qualified to act as arbitrators. However, when read with Section 43F, it suggests that the requirements are only relevant at the stage of accreditation. This ambiguity throws open the door for challenge to arbitration awards which may be rendered by arbitrators who do not meet these qualification requirements.

• It is unclear whether the ACI will be performing the role of accrediting arbitrators. A combined reading of the various provisions appears to suggest that they only need to identify professional institutions who can provide accreditation of arbitrators, and review this accreditation/grading when felt relevant.

• The Arbitration Council of India is expected to maintain a depository of all arbitration awards. It is unclear how this would interplay with the requirement of confidentiality (for instance, are parties to redact confidential information?) and how ad hoc arbitrations which do not come through the system even for appointment of arbitrators will be captured.

Things Missed:• The Act does not make any provision for emergency arbitration orders despite a specific recommendation to this effect and its prevalence in the present day.

As the Bill is pending consideration, it is hoped that some of the above drawbacks and ambiguities that plague the Bill in its current form will be resolved.

'What is so Good in The Arbitration and Conciliation (Amendment) Bill, 2018' has no comments